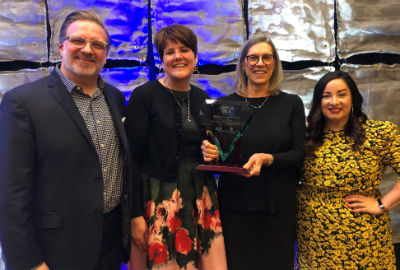 The Legacy Award acknowledges outstanding Bellwether winning programs – AC won a Bellwether Award in 2017 – that have illustrated five or more years of successful implementation, and which other colleges might choose to replicate.

AC emerged from a field of 10 finalists to capture the Legacy Award.

Since the inception of the No Excuses Poverty Initiative in 2012, AC has recorded steady gains in A-to-C pass rates and fall-to-fall retention, three-year graduation/transfer rates, percentage of students who attend full time, and more.

After capturing the Bellwether Award in 2017, AC’s strategy for accommodating low-income students was detailed in the May 30, 2018 issue of The Atlantic.

Subsequently, in response to a deluge of requests, AC hosted a No Excuses Poverty Summit. That was last June. Initially designed to accommodate 40 people, the summit drew 125 representatives from colleges and universities in 14 states.

Later in 2018, AC received a $210,000 grant from the Trellis Foundation to conduct a self-study of its poverty initiative. Results of that study will be disseminated nationally.

Now the College is in possession of the Bellwether Legacy Award, an accolade determined by a national panel of expert judges and sponsored by the Association of Community College Trustees.

“This Legacy Award is especially gratifying because it demonstrates the staying power of our commitment to students, especially those most hard-pressed by the realities of poverty,” Dr. Russell Lowery-Hart, president of Amarillo College, said.

“We are so honored and proud,” he said.

A delegation from AC, led by President Lowery-Hart and Regent Michele Fortunato, attended the Futures Assembly and accepted the award.