Elizabeth Hargis spent the first few days of the fall semester walking to the Washington Street Campus of Amarillo College, a necessary daily trek requiring just under an hour of her time. 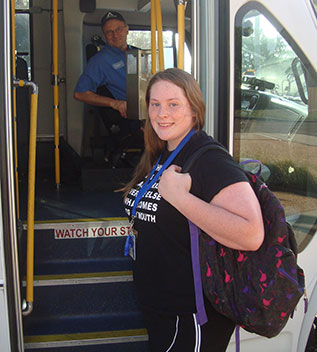 Fortunately, Elizabeth’s protracted school days were shortened considerably when a friend informed her that she could ride city buses for free.

“I don’t have a car or a job, so when I heard the buses are free for AC students it really helped me out a lot,” the general studies major said. “It’s very convenient. Now I ride the bus to AC every day, for like 10 minutes.

AC and the City of Amarillo began a transportation collaboration in August. The alliance provides free bus rides for anyone with an AC identification card – students and employees, alike. City buses currently provide daily service to AC’s West, Downtown and Washington Street Campuses.

However, the deal is inclusive of all City bus routes and Spec-Tran services – not just the routes serving AC campuses. Just show the driver your AC identification card and you can ride anyplace the buses go, six days a week (no buses on Sunday) for the entire 2019-20 school year.

Amarillo Transit Director Marita Wellage-Reiley says word is spreading about the partnership with AC and more than 1,000 free rides have been given to members of the AC family since Aug. 15 when the program officially began.

“I’m very pleased with the ridership growth,” she said. “The City believes in a highly educated population and we are willing to do anything we can to help promote that.”

Selene Dantoin, a freshman general studies major, recently stepped off a bus at 24th and Washington with plenty of time to spare before her first class of the day.

“This is really helpful because I don’t have a car right now,” she said. “I’m really glad they did this for students. It’s so easy to hop on a bus, and at the same time I’m saving money, too.”

Just before the driver of that particular bus closed the door to return to his route, he was asked where it was that he happened to obtain his CDL (commercial driver’s license).

“Why Amarillo College, of course,” he said with a smile. “Watch your step, please.”