AC and Panhandle PBS invested in May performance of Missa Solemnis 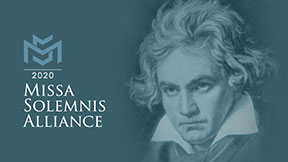 However, Dr. Nathan Fryml, artistic director for Amarillo Master Chorale, is confident that his chorus, and its accomplished partners, are up to the test.

‘’We have the talent, we have the spirit, we have the commitment and resources, and we have the desire and the leadership,” said Fryml, who also serves as director of choral activities at Amarillo College.

“We certainly believe it is in the best interests of our ensemble and the Music Department at Amarillo College to be involved in a major project like this.”

Thus, the Master Chorale and AC became invested in a unique community-wide alliance whose musicians – from throughout the region, and beyond – have been rehearsing since the summer of 2018 in order to stage ‘Missa Solemnis’ in May.

The Missa Solemnis Alliance is the brainchild of David Palmer, artistic director of Chamber Music Amarillo, which will present the towering masterpiece as a means of commemorating Beethoven’s 250th year of birth.

The public performance of what essentially is a choral mass sung in Latin will be at 7:30 p.m. May 30 at the Globe-News Center for the Performing Arts. Tickets are on sale. A second performance that same weekend is being considered.

David Palmer’s father, Michael, will conduct. The senior Palmer is a renowned conductor who studied ‘Missa Solemnis’ while serving as associate conductor under Robert Shaw, perhaps the nation’s finest choral director, with the Atlanta Symphony Orchestra.

Internationally renowned soloists, such as soprano Katie Van Kooten and Amarillo’s own tenor Eric Barry, also are committed to the project.

Additional members of the alliance are Amarillo Symphony, First Baptist Church Amarillo, West Texas A&M University, and Panhandle PBS, which is serving as documentarian of the massive undertaking.

Under the direction of Marcie Robinson, instructor of speech communication and former PBS producer, Panhandle PBS is telling the story of the musical alliance’s preparations through videos posted on Facebook and the web.

PBS’ effort will culminate in a 30-minute documentary, which will include portions of the crowning performance.

“Our focus is on the human elements, like what it takes for a retired music teacher or a homemaker or just anybody with a full life to make time for weekly practices over an extended period of time for a project of this magnitude,” Robinson said. “It’s quite a commitment.

“What I’ve learned so far is that ‘Missa Solemnis’ is so beautiful that it almost brings tears to your eyes,” she said. “And also, huge undertaking though it is, we have the talent and the gumption to perform it right here, we really do!”

Fryml characterizes ‘Missa Solemnis’ as a project of enormous magnitude that, despite being among Beethoven’s greatest achievements, is seldom performed due to the great scope and difficulty of the music.

“From a human-performance perspective, the piece sometimes feels too long, too high, too loud, too rich, too exposed and almost too replete with Beethovian surprises, but it’s filled with positive connotations for all – audiences and musicians, alike – if you’re willing to duke it out,” Fryml said.

“Phenomenal solos are woven throughout the entire piece,” he said. “We are fortunate to have some incredible talents in our region, not just from Amarillo, but elsewhere in the Panhandle, and we’ll have some guest artists from outside the region, as well.

“We look forward to proving to ourselves and our community that it is worth investing considerable time and effort to see this great composition come to life.”