A film and a panel discussion concerning race relations in America are on tap as Amarillo College observes Black History Month, while continuing this year’s Creative Mind Lecture Series: Reverberations of Conflict: The Legacy of the Civil War. 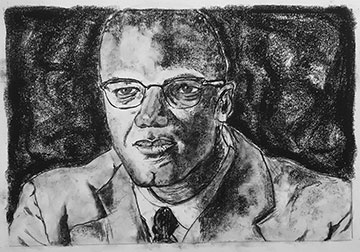 AC’s long-running Creative Mind Lecture Series – now in its 36th year – will present the documentary film “I Am Not Your Negro” at 6:30 p.m. Thursday, Feb. 27 in the Concert Hall Theater on the Washington Street Campus.

After the film, a panel discussion will feature local activists Mildred Darton and David Lovejoy, first vice president of the Amarillo NAACP, along with Jill Gibson, chair of media, arts and communication at AC.

Kourtney Andar of Santa Fe, N.M., an activist, writer and educator, will serve as moderator.

Both the film and the panel discussion, which are being co-sponsored by Panhandle PBS and the AC Foundation, are free and open to the public.

Additionally, those who attend will be treated to an exhibit of drawings created by AC art students and inspired by the documentary. The drawings are on display now through Feb. 28 in the Common Lobby Gallery, which is located in the foyer at the entrance to the Concert Hall Theater.

Everyone is also invited to a pre-film reception at 5:30 p.m. at the Amarillo Museum of Art, located adjacent to the Concert Hall Theater.

The documentary, narrated by Samuel L. Jackson and directed by Raoul Peck, is based on reminiscences of the late James Baldwin, a scholar, activist and friend to Martin Luther King, Jr., and Malcolm X.

“Director Raoul Peck makes Baldwin’s words reverberate into the present, challenging us to consider what has truly changed since the Civil Rights era,” said Eric Fau, assistant professor of social sciences and coordinator of the Creative Mind Lecture Series.

“Following the film, our panel will reflect upon the issues raised by the film and their work to rectify racial inequality in Amarillo,” he said.

The 2019-2020 Creative Mind Series kicked off its 36th year last November with a lecture by noted author S.C. “Sam” Gwynne. Fau said Reverberations of Conflict: The Legacy of the Civil War will conclude with a lecture in collaboration with AC's June Jazz concert series late this spring.

For more information about the movie screening and panel discussion, please call the AC Foundation at 806-371-5107.

NOTE: The drawing above is "Malcolm X" by Ileana Padilla of Associate Professor Steven Cost's Drawing I class.