Aaron Faver, instructor of social sciences at Amarillo College, remembers the Alamo, particularly a display he saw there as a kid that featured letters written in the dire eleventh hour by its ill-fated defenders. 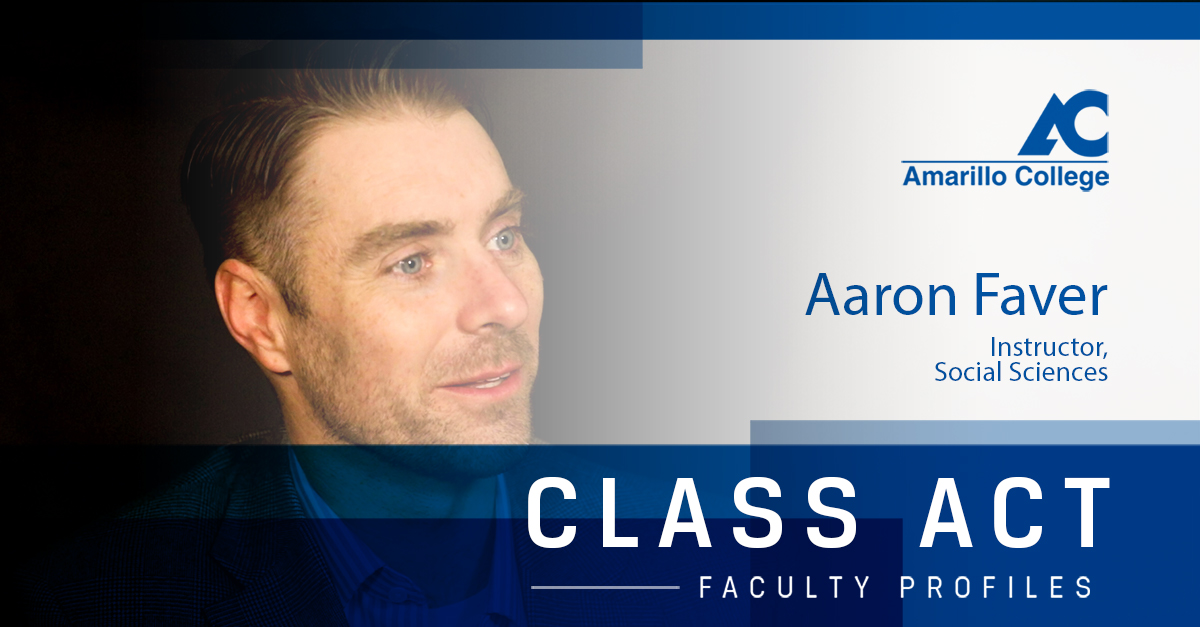 “When we visited the Alamo, I was only like 9 or 10, yet I’ll never forget the emotional impact those letters had on me,” Faver said. “It was the last correspondence those men were ever going to have with their families.

“All I could think of was how much devotion it must take to make that kind of sacrifice.”

Faver credits that stirring brush with Texas history as a catalyst for his decision to become a political scientist – not a simple conclusion to reach for someone whose aspirations early on revolved almost exclusively around rock and roll.

“I was going to be rock star, yeah,” said Faver, who grew up in Muleshoe and moved with his family to Amarillo when he was 16. “I learned to play the guitar around seventh grade and that was it.”

Faver, a graduate of Amarillo High School, helped form a number of rock bands – September Drive was the high-water mark – and he always served as principal songwriter. However, about three years after finishing high school, his priorities pivoted to his other passions, those rooted in history and government.

“Government is a reflection of our values and who we are,” he said. “Every major decision that gets made affects our lives and if we’re not interested in that – if we’re not engaging in that – then we’re missing out on a major part of our dominion, I think, of not only our own lives, but the lives of others.”

With eyes on higher education, he went to Waco and attended McLennan Community College and then Baylor University, where he earned a bachelor’s degree in history. Next, he completed a master’s certificate at the prestigious Bush School of Government and Public Service in College Station.

Faver joined the AC faculty on a part-time basis in 2015, and he’s been teaching U.S. government and politics full time since 2018. He says the discussions he leads are often influenced by the lyrical side of his persona.He then acquired a master’s degree in public safety studies from West Texas A&M University. He now is working toward a doctoral degree focusing on national security policy issues through Liberty University.

“I think the musician side drives me as an educator,” Faver said. “I don’t think there’s a single thing we can do as educators that is more important than synthesizing ideas: taking complex ideas, making sense of them, and doing it simply.

“Our students do it very well,” he said. “They come from so many different backgrounds, life experiences, ages . . . flexibility and dynamism help inform their synthesis of ideas, and it only makes it that much more beautiful when we talk about it in class.

“A musical producer I admire said songs are meant for everybody to figure out and digest for themselves, and I feel the same way about education.”

Faver is a contributing author for Statecraft Simulations, a technology-based teaching tool in which students assume roles as world leaders and are tasked with solving dynamic problems in an interactive environment. He uses this resource, among others, to engage students in class.

However, Faver likes to engage with students outside the classroom, too. In conjunction with AC’s Student Life, for example, he helped orchestrate Civics Week, an effort to increase student engagement in local issues and elections. Voter registration was encouraged; non-profits visited campus to interact with students; a guest speaker was brought in.

He also is known to take students near – like to the Ronald McDonald House, where they serve as volunteer cooks – and far – in 2022 he will lead students on an investigation of conflicting environmental and energy policies in the icy Arctic.

“Amarillo College is a special school,” Faver said. “We have a devoted group of teachers that really work hard. I hope our students see all the things we try to foster in our classrooms, the passion that we bring to our subjects.

“College is a unique time in everybody’s life, but the resources of a college are really what matter the most, and the resources at Amarillo College are, I think, the wonderful faculty and their ability to engage with and care for students.”

Faver enjoys hunting. He has served as a volunteer firefighter. Music will always be a part of his life, although he and his wife have their hands full just now with a young son and a newborn daughter. Of course, he remains ever cognizant of the fast-changing issues of government and politics.

Consequently, he often graciously shares his unbiased analysis of current political issues at the request of a variety of local media outlets.

Whenever new acquaintances ask Faver what he does for a living, he naturally explains that he teaches U.S. government and politics at Amarillo College. “What an interesting time to be doing that,” is how they typically respond.

“I’ve been hearing that for a decade,” Faver says, “and I think that I’ll probably hear it for the next 30 years."