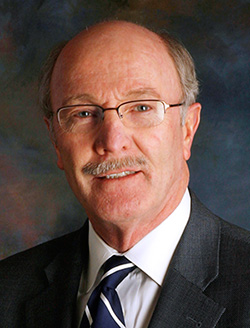 The Amarillo College Board of Regents voted unanimously Tuesday night (May 20th) to rename the newly-revised Mass Media program after retiring AC President  Paul Matney. It will become the Matney Mass Media Program in honor of the leader who began his 35-year AC career teaching in the program formerly called mass communication, radio/TV and journalism.

“This is a fitting tribute to Dr. Matney,” said Ellen Green, chief of communication and marketing, who noted that Matney taught more than 2,400 media students during his years in the classroom and also worked as a local weathercaster on the weekends.

“He has strong ties to area broadcasters and former students and employers in the media industries,” Green said. “Since he began his higher education career in this program, it makes sense to honor his legacy this way.”

“Because he has been so heavily involved in redesigning the mass media program—it was his academic home, and where his heart is—we feel this is the ideal way to honor him,” said Dr. Russell Lowery-Hart, vice president of academic affairs.

In conjunction with the program renaming, the AC Foundation has established a Paul Matney Fund, which will assist the Matney Mass Media Program and other AC initiatives. Gifts in Matney’s honor will be used to support the outgoing president’s foremost goal—student success. The Matney fund will be used for scholarships, faculty support, and program needs within the college.

New Mass Media courses featuring both certificate and degree offerings will be available this fall and will include classes in social media and digital communications along with flexible certificates that offer multiple entry and exit points. Other changes will include a significant update to the Panhandle PBS studio, which now also will serve as lab space for Mass Media students, the addition of a web-streaming studio, the creation of new certificate and degree options including social media and online marketing concentrations, and the development of three new classes: Social Media Tools, Interactive Web Elements and E-commerce.

“I know these changes will lead the Matney Mass Media Program to emerge as a signature program for the college,” Lowery-Hart said.

Matney’s 43-year career in higher education began in 1973 at West Texas State University, where he was an instructor and director of radio and television until moving to AC in 1979 in a similar position. Just one year after joining the AC faculty, Matney was named chair of the Language, Communication and Fine Arts Division. He went on to serve as vice president and dean of instruction and then acting president and president of the college. He has spent the past six years in this top leadership role and will retire later this summer.