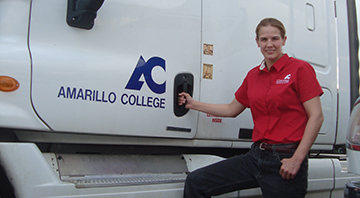 Sandy Sloat originally set out to obtain a welding credential at Amarillo College and is only one class removed from doing just that, but before proceeding on to that particular outcome, she took an altogether different tack.

Sloat, 34, just became the first completely deaf female (second deaf student) to graduate from AC’s Truck Driving Academy. She graduated on May 4 with a sterling 90-percent average and now has designs on a career behind the wheel of a big rig.

“I still plan to finish welding, but I think it will be more of a hobby,” Sloat said through her interpreter, Kristen Thomas, of AC’s disAbility Services. “I have always liked to build and repair things, but I needed to have a Class B license for welding and it just made sense to me to go after the Class A license, so I did. I just didn’t expect to like it so much.

“Truck driving I think can be a great profession, and I really like to travel.”

For the record, long distances have never been a deterrent for Sloat, who was not only a member of the women’s cross country team at Gallaudet University, but represented the U.S. by turning in a fifth-place finish in the marathon event at the 2005 Deaflympics in Melbourne, Australia.

It’s been about 10 years since she received her bachelor’s degree in biology from Gallaudet, yet three of her cross country times still are listed among the top ten all-time records at her alma mater. Of course now she has an additional alma mater, one the St. Louis, Mo., native selected because she has family in the Amarillo area.

“Everyone at AC has encouraged me throughout this process,” Sloat said. “The teachers are great, and Kristin has been very helpful as my interpreter. It is difficult for deaf people, especially deaf women, because we get the most basic, lowest-level jobs, like cleaning jobs.

“I came here because I wanted to be a welder instead of a welder’s helper. Now it looks like I’m going to be a truck driver. The perceptions of society are not always fair, but I’m showing that women—even deaf women—can do things that perception says we can’t.”